This post may contain affiliate links. If you use these links to buy something, we may earn a small commission that helps us continue to make quality content for you. Thanks for your support!

The Grizzl-E Classic EV home charger is a solid workhorse built to last, manufactured by United Chargers and made in Canada. It’s no wonder that we’ve chosen it as our top pick for non-smart chargers, but of course, we can’t just tell you that without giving you a rundown of the details to prove why we feel that way.

We really like the Grizzl-E Classic because of two main reasons: power and durability. This EV charger delivers 40 amps of power, which allows you to recharge your EV at a decent rate without needing to hardwire the unit. It’s also a tough beast; check out the Youtube video above for footage of the device being run over by both an SUV and an Argo ATV before going right back to work as if nothing happened! If you are in need of a quality home charging station, the Grizzl-e Classic is an excellent choice. 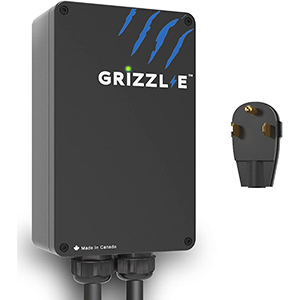 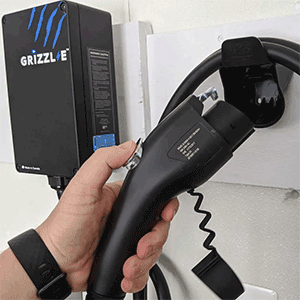 Key Specs of the Grizzl-E Classic

Installation of the Grizzl-E Classic shouldn’t pose much of a problem. You’ll want a dedicated 50 amp circuit with an outlet close by, or if that’s not possible, you can obtain pre-set dip switches to de-rate the power down to 16, 24, or 32 amps from the manufacturer. After attaching a metal wall plate to the wall along a stud (for extra stability) and the unit to a bracket of its own, the two can be aligned and held into place with a supplied pin. If you decide to go for the hardwired version, remember: any time you install a hardwired EV charging station in your home, it’s always good practice to hire a licensed and bonded electrician to make sure it’s done safely.

United Chargers also offers a locking version of the pin for a little extra security, whether you’re mounting the unit outside or in a multi-family parking situation. After that, it’s just a matter of plugging it into your outlet and EV. The Grizzl-E does come with a remote holster, but if it's not quite what you're looking for, we suggest checking out this holster and cable hook instead.

Once it’s all ready to go, just plug in your Grizzl-E Classic and let it go to work. With the full 40 amps, you should be able to add 28-30 miles of range to an EV per hour of charging, depending on your EV’s efficiency.

One nice thing about the Grizzl-E is that the charger can automatically restart. So if you’re recharging and suddenly hit with a temporary power outage, the charger will re-initialize the charging session once power returns.

That said, this charger is very simplistic in its design and doesn’t offer any connectivity or an LED display like in many smart devices. Not so great if you like monitoring your charger via an app, but if you are only interested in basic functionality, then the Grizzl-E Classic might be a great choice for you. Otherwise, you might want to consider the Grizzl-E Smart instead.

One of the big selling points of the Grizzl-E Classic is that its metal housing is NEMA 4-rated, meaning that it can withstand all kinds of extreme weather. With that in mind, we put it to the test.

The CEO of United Chargers decided to do a little durability testing of his own, so we can’t take the credit for this one, but the results were certainly impressive. He took the unit out into the company parking lot and drive over it with the front and back tires of his SUV on the pavement. Not content to stop there, he also took the Grizzl-E Classic out to a frozen Canadian lake and drove over it three times with an Argo ATV before dunking it into the lake itself. After driving back to headquarters, he plugged the device back in to show that it still worked. You can’t get much tougher than that.

So how did the Grizzl-E Classic hold up in the freezer test? Since this device is manufactured in Canada, we were curious to see how it would do after 14 hours spent in a commercial ice cream freezer to imitate cold weather exposure. The device emerged at a not-so-balmy temperature of -9° F when we pulled it out, but despite the cold, the cable remained reasonably pliable. It wasn’t quite as good as the cable on the ChargePoint Home Flex, but still much better than the cable of the Enel-X JuiceBox. Considering that the cable is marketed as heavy-duty and meant for outdoor installation in cold-weather areas, we were pretty happy with the results.

Tom's Rating for the Grizzl-E Classic

In order to give EV chargers a thorough review, we rate them on a point system category by category, each one starting out with 15 points. Once we're finished, we end up with a final score out of 100. The Grizzl-E Classic scored well thanks to its power and weatherproof rating and wasn't particularly weak in any one category. Overall, the Grizzl-E Classic scored a total of 87 points and came away with a rating of 4.35 out of 5 stars. 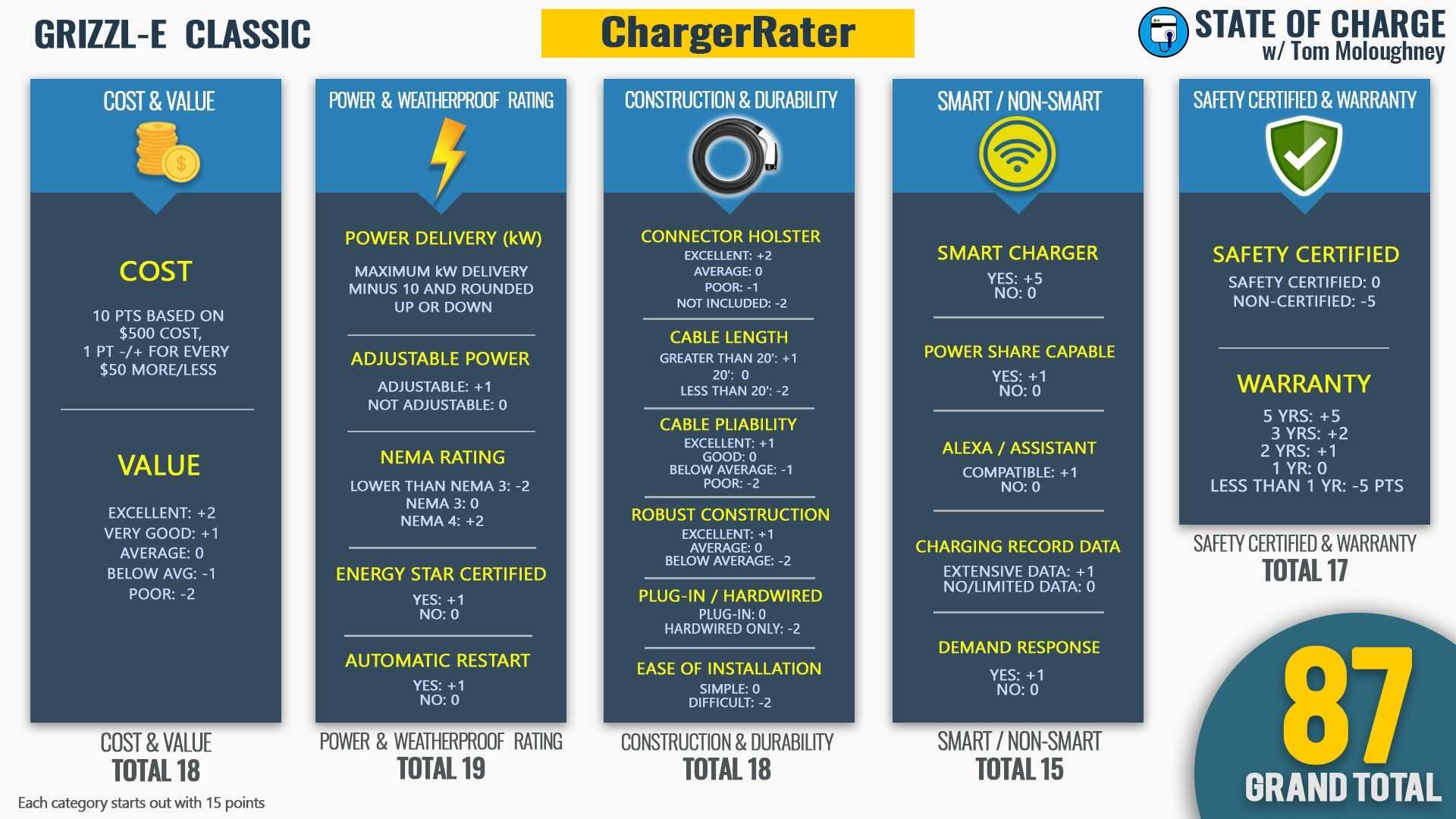 After averaging the ChargerRater score with my personal score of 4.75 out of 5 stars for this unit, the Grizzl-E Classic came away with a final score of 4.55 stars out of 5. The device offers dependable charging capability with a sturdy case and cable, plus it’s also safety certified. For a non-smart charger, it’s an excellent score that makes it easy to see why we recommend it so highly.

The Grizzl-E Classic EV charger is available for $459 from Amazon. Give the video a look and let us know what you think in the comments below. 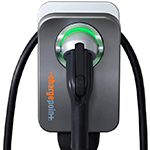 A powerful 50-amp charger with smart-charging capability in a compact, stylish form 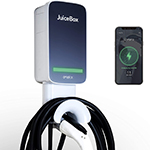 A highly-rated 48-amp charger with Wifi and Bluetooth, as well as adjustable power output 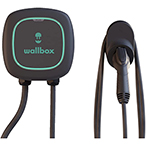 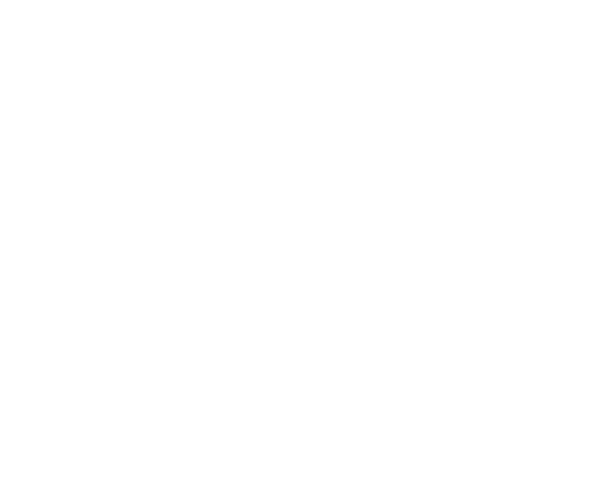